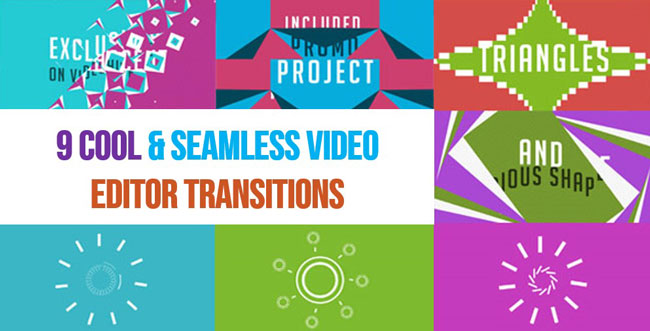 What is the best way to connect two videos naturally? Adding proper Video Transitions! Until now video transitions have been used in almost all compelling movies. But how to add video editor transitions seamlessly to the clips? And which is the best video transitions editor on Windows for both beginners and professionals? Look no further!

Herein we’d like to share with you nine types of video transitions and some of the best free video editors with transitions for Windows.

1. What is the Video Editor Transition?

Video Editor Transition, called film transition, also directly called video transition, is used between adjacent video clips in the post-production process of video edit or film edit by which scenes and shots will be merged smoothly.

Some commonly-seen video transitions may include dissolves, L cuts, match cuts, wipes, and Fades. And with technology upgrading, today the AI and 3D elements are organized to video transition family.

2. How to Add Seamless Transitions to Video?

Most video editing software allow us users to add video transitions seamlessly within the editors. Taking AceMovi Video Editor (we’ll talk about below) as an example, first, click the Transition icon, then drag-n-drop one of the effects that you like between two footages on the timeline, last to set duration or mode with the Col Whisk as you want.

Adding befitting transition effects to videos always helps making the thumbnails more consistent and smoother. So, we’ve aggregated examples & effects of the coolest and seamless video transitions for the Microsoft system in the following by the two samples – Pictures: Test-Red and Test-Black.

Just like opening the window blinds in daily life, the two scenes within the video will change in a linear pattern - the second clip will emerge from the inversion of multiple cells. Is it very cool, right? Because it can reduce distance and enhance cohesion.

Horizontal Blinds, as its name, transiting clips from up to down. That is to say, it’s matchable when your video is captured from horizontal angles like shooting books, desks, and windows, etc.

This is a kind of Blinds turns clips from left to right.

When your video is being filmed and photographed by a closer or farther camera, better try Zoom. Specifically, it’s distinctive from horizontal or vertical transitions, zoom subtle to the point of melting videos.

It has originally cut the video into dozens of tiny squares and then bigger all of them to fill the second scene.

Rotating both right and left sides by encompassing the gravity point of the video, it more seems like circle rolling. And you can it especially the two clips are symmetrical located, such as an apple, the globe, or others that can be cut averagely.

Fade usually used at the begging of a video, which makes the next scene gradually to be visible.

Fade in shows the linear from bright to obscure. Sometimes it will apply to the ad.

Whirl can be seen as a higher level of Wheel, but differences still exist. Whirl gives us users an air of spatial rotation with texture, also, the effect of Whirl has been slowed down purposefully to make it cooler. Want to have a try?

Warp is a very cool twist transition for protruding the first clip until the second rise, which is often added to strengthen comparability.

Here comes the Staircase transition, conceived from the ups and downs of an array of stars, which could be applied as lifting the mysterious veil of what the creator wants to express.

Pixelate is usually involved in the game or animation video that proceeds with multi-colored cartoon elements.

3D transitions, whatever the animal perspective, AI shaking, or multi-dimensional shape, etc., must be the bang for us videomaking lovers. However, we have to admit that 3D transitions should be used under specific circumstances like dreamscape, AI, science fiction, or time travel. Right now, let’s dive into the 3D pool!

Envisioning that this is an orb-shaped camera, how is it going to capture video?

A person’s single eye can reach 156 degrees maximum, while two 188 degrees. But the fish can reach 230 degrees. So, some designers conceived the ideas to create transitions by imitating animal eyes.

Box Flip is more likely used to display products, try to think when we’re going to put forward something new and magnificent, is there anything cooler than flipping the videos quickly with 3D effects?

So, how can we find those cool and seamless video transitions? Constantly scour the web? Or make it by ourselves? The best and easiest solution, without a doubt, is to find a video editor with those transitions. Now, three video editors with different own standalone transitions resources have been assembled below. Let’s have a look! 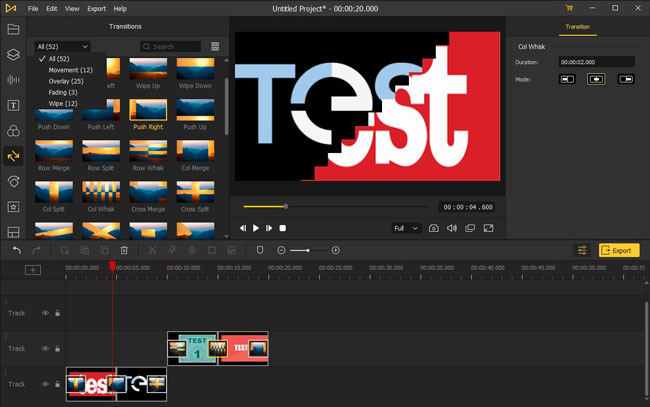 AceMovi, a fully-featured video editor that works on Windows & Mac, contains more than 50 types of cool transitions for videos. Moreover, it’s very easy to find the transition effects we want upon the clutter-free interface - four categories have been separated, they’re Movement, Overlay, Fading, and Wipe.

Furthermore, AceMovi offers more video editing features like trimming, merging, converting, recording, and creating, etc. Meanwhile, you can polish videos with hundreds of captivating effects, filters, texts, music, and so forth. For example, you’re allowed, with AceMovi, to split the screens into two or more different parts for telling your video with multi-angles synchronously.

Comment: AceMovi released its trial version for free but with a watermark, and you can use all of the transitions for free both on the demo and full version without registration and VIP identity in advance. 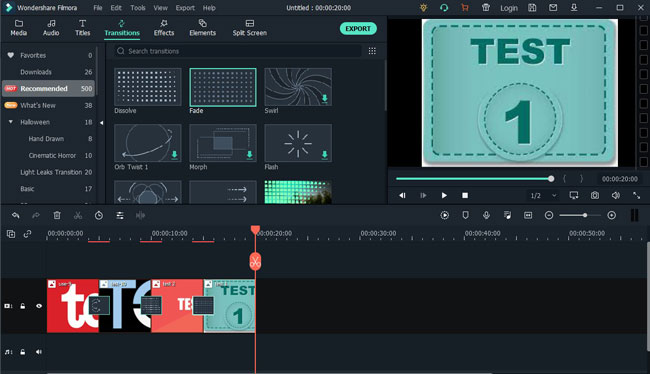 Comment: With Filmora, the trial version is published for free yet watermark printed, and some of the transitions are downloaded with log-in or VIP afford beforehand. 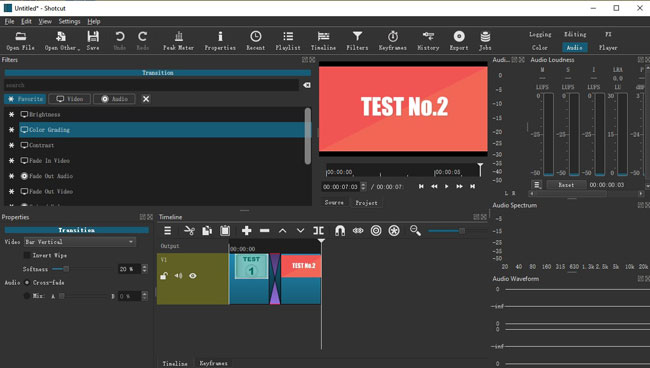 The biggest difference between Shotcut Video Editor and others is Shotcut supports more 3D genres & related parameters, for instance, 360 Stabilize, 360 Equirectangular Mask, or 360 Hemispherical to Equirectangular, etc. What’s more, the video transition will be put automatically when you drag one clip above another.

Comment: Shotcut carries a complex interface and is unfriendly for beginners.

Ⅳ Words In the End

Better video, definitely, is made with better transitions, effects, filters, and more. The 9 types of video transitions listed above are the most commonly used ones for video making. And the three video editors we’ve recommended must be good enough for every type of video editing when you are looking to add transitions to your videos. And for more cool and seamless video effects, simply visit their official websites and download the software to have a test, please. Lastly, as before, it’s advised to try more if you’re unfamiliar with many kinds of video transition effects.