Nowadays, the meme has become one of the most commonly-used and amusing elements in our discussions, usually, it’ll just appear after the dialogue box. But how do you know the way to make & edit a meme? First and foremost, you need a meme generator. If you are new before the meme-making game, you may be wondering what meme creator apps other meme-makers are using to make the greatest memes. And in today’s post, I'll show you the top 11 best free meme generators and editors, including some blank meme generators and AI meme generators, together with their distinctive features and ratings so that you can choose the proper one for you effortlessly. Not only here can you navigate to meme generators for PC and online but also you can try some meme generator apps on mobile. Now, let’s get started! 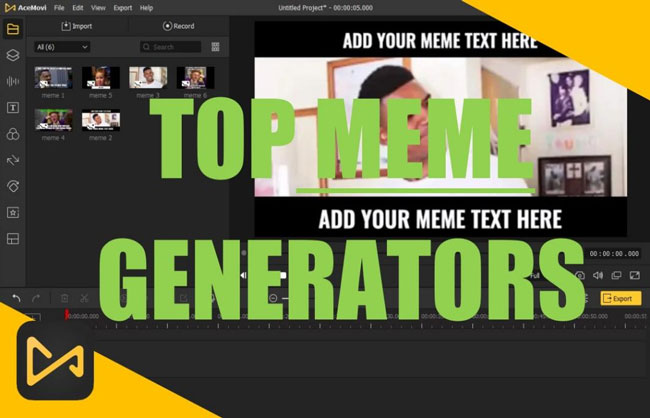 Accept it! Memes can make people laugh a lot and implicitly show the connotations inside your words. Various humorous memes can be found on social media platforms like Facebook and Twitter.

All meme elements can be put into the TunesKit AceMovi regardless of the meme type is a GIF, image, or even a short video. AceMovi is one of the easiest meme generators and makers for beginners and skilled men. And you can download it for free at any time.

AceMovi also plays the role of a good Meme text generator, you can find more than 100 different types of ready-made meme texts, 20+ static meme texts as well as 40+ dynamic meme texts. You can add the wanted one just by going to Text > Text template, Static, or Dynamic, and then put the genre on the meme generating timeline.

Apart from meme texts, this tool empowers you to apply meme filters and overlays to make some color grading. More importantly, all of those meme elements are free to use on the trial version of AceMovi. And in the following, you can download this meme generator directly. After you download and install AceMovi, let’s go to the basic tutorials on how to make a GIF meme. And you may also want to know how to make a video meme.


How to Make Your Own Meme: Following This!

Do not forget to download and install the AceMovi meme editor before doing any workflow. You can get this toolkit on Macs or Windows. And you can pay $19.95 to get the monthly plan, $39.95-year plan, or $59,95-lifetime plan. The formal license will completely remove the embedded watermark. 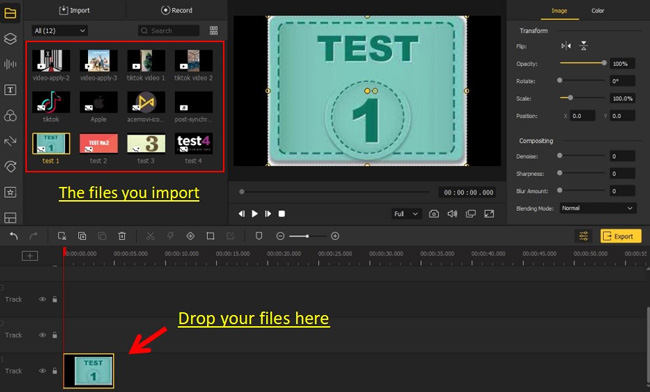 With AceMovi meme generator, you can just drop all the elements under the track. Or you can click the Import > Add to Timeline if you’re planning to use those filers later.

Commence Making a Meme on Your Computer 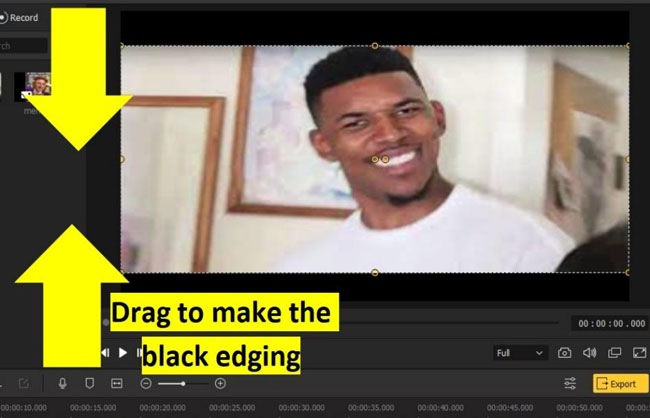 You can just drag the windows’ edge to resize the meme. This step will leave two black edgings on the top and bottom. 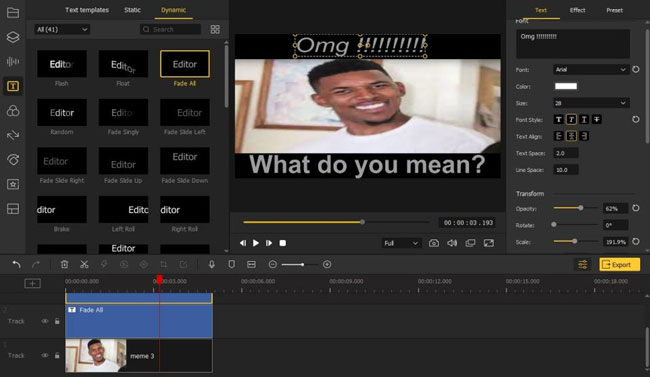 You can pick up one meme text from the panel on your left hand. And then go to the Properties > Text on your right hand. You’ll find the parameters to set meme font, meme font style, meme font color, meme font opacity, etc. Set the parameters based on your requirements! Here are more meme styles you can try with AceMovi! 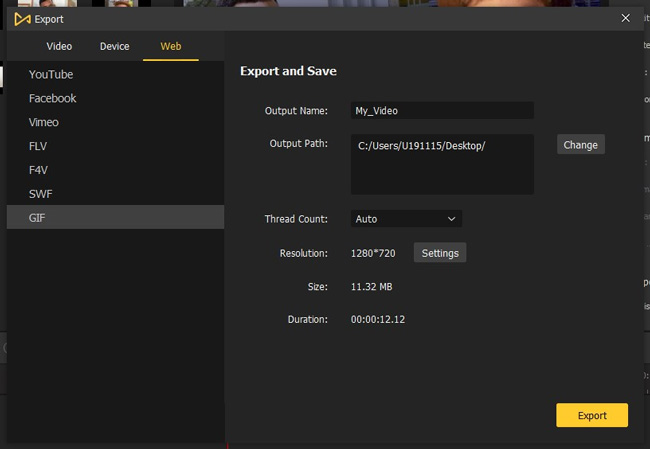 Actually, if the meme is a photo, you can just take a snapshot (With AceMovi, the Snapshot button is just beside the Play button). But the GIF meme should be downloaded in a different way, you need to click the Export button, and go to Web > GIF. Here you can also set the resolution, thread count, and output path. iMovie is an open-source meme generator and editor yet only for Mac and iPhone users. You can add import any format of your meme into this tool like videos, photos, or GIFs. And there won’t be any watermark left with your exported memes.

iMovie comes with 30+ types of meme texts and you’re free to change the meme font, set the meme aspect ratio, post on social platforms, and share via e-mail. With this meme generator, you don’t even need to learn the tutorials given on YouTube because all the built-in features are well organized on the toolbar. So if you’re a Mac user, don’t miss out iMovie meme editor.

In this section, you’ll see 5 very user-friendly meme generator apps and you can download them all on your devices no matter iPhone, iPad, or Android. Actually, the meme generator apps come with more meme templates and meme renewals. Just keep scrolling down! 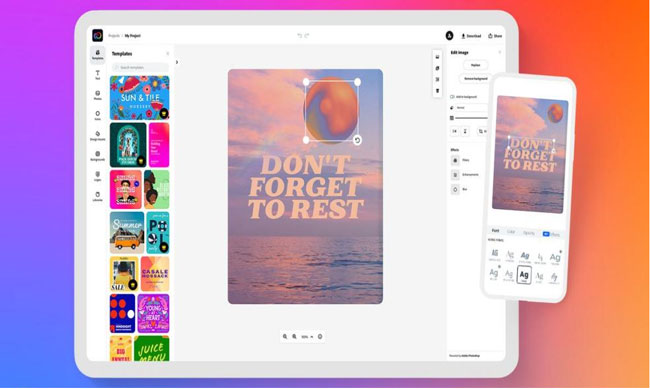 Creative Cloud Express, also named Adobe Spark Post is an elegantly designed meme generator. We've all heard about Adobe for a long time, so we don't need to be reminded of its capabilities. If you think of it as a meme generator, you'll be able to choose from an infinite number of backdrops and text appearances. Hundreds of meme templates and meme fonts are built-in this app. This program is not only a strong meme generator, but it also makes finding new memes simple. The browsable material is updated daily, ensuring that you are constantly up to date on the newest meme trends. You’re allowed to choose from a bunch of meme templates with this meme generator app, no matter Bernie meme or Spongebob meme. When it comes to creating viral memes, most meme-makers will suggest this MemeGenerator. This is one of the most popular meme generator apps, which allows you to browse through their extensive image library and simply submit your photos.

Besides, with Memedroid Meme Generator, you can set the meme text freely on the specialized page, or even change the bit rate. And you’ll receive a library of meme templates every day, you can choose to edit it or use it in your dialogue. Tumblr is a social media platform to establish an account and share photos and videos. A GIF editor and photo editing capabilities are included in the iPhones and Android Smartphones software. You’re allowed to meet new meme-sharing friends with this app or follow some popular meme editors on your group in addition to making your own memes. The fact that this meme generator has over 100.000 installations on Google Play demonstrates how fantastic it is. Mematic is meant to help you quickly and easily make memes. All you have to do now is add captions and share the meme with your friends.

You’re saying that you don’t want to download any apps and software? Here’s the solution. With the 4 best free online meme generators, you’ll find more types of meme templates and meme elements yet you may need to check the internet quality before using those tools. Keep reading! If you like memes, you've probably come across this very popular meme creator page. ImgFlip meme generator is an online meme creator that allows you to create memes without registering. ImgFlip has a large meme library to select photos and write captions. After that, you may quickly post the memes on social networking sites. You may also edit existing GIFs on the site. All the meme-making tutorials are very simple to carry out on this online meme generator. Makeameme.com is a social networking site to create a profile and upload photographs and videos. This program includes a GIF editor and picture editing features. You may customize the text by changing the font, size, and color and adding as many stickers as you like to your memes. Makeameme.com may be used to locate a variety of photos, including pet photos, autos, and fashion images, as well as memes. You must first publish memes to this site before sharing them on other social media platforms. Canva's Meme Generator is ranked second on the list, with millions of stock pictures available to users. You can use your photographs to build memes and change the font and text colors. To make your own meme with this generator, you can directly put the images inside and then try to add texts. Also, you can browse many more meme templates with this generator.

Pinterest and memes are inextricably linked. Memes and Pinterest have coexisted in the past and continue to do so presently. Do you want to discover why this website is so successful? Some of the most viral memes in history were created on this site.

Pinterest, the most popular meme creator online for free, allows you to do things like upload photographs, alter them, and share them on social networking sites.

Making a meme requires creativity and a sense of humor, but you'll also need a strong tool that allows you to communicate your thoughts exactly as you want. A decent meme generator tool can let you forget about the technical aspects of meme creation so you can concentrate on what matters most.

What's your favorite software for making memes? Share your thoughts below!