As new technologies have emerged, the user experience (UX) has undergone a significant transformation. You may achieve immersive UX by using 360-degree movies in various sectors. Immersive videos, often known as spherical videos, are 360-degree videos. Also, they are responsible for delivering a 3D & multi-directional depiction of the item from all angles at once. Capturing, stitching (in-camera or via software), and post-editing are all part of generating a 360-degree video. 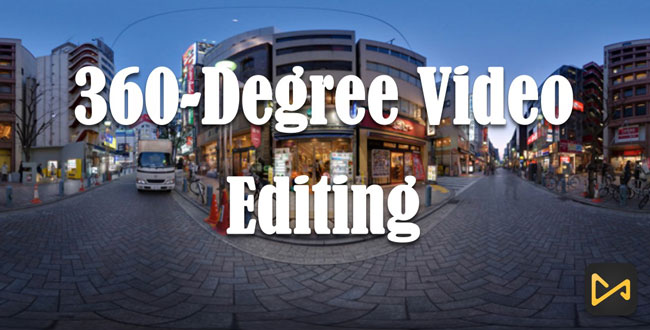 As one of the best 360-degree video editing software in this listing, Insta 360 video editor shows its great power in both 3D video capture and enhancement. Perfect for awesome VR pros, YouTubers, and athletes.

Insta360 Studio 2022 empowers you to have access to shot and edit images, audios, and videos on ONE X2/X, ONE RS/R, GO 2, GO, ONE, and more. Users are allowed to download the Insta360 plugins for Adobe Premiere Pro and Final Cut Pro so you can choose some of the in-built features from other video editors for more creatives like 3D charts and 3D texts.

You find that Insta Studio is easy to export 3D video in monoscopic, stereoscopic, and equirectangular formats. This tool is unsuitable for editing and prompting MP4 videos. For files store and basic 360-degree video edits like trimming and cropping, you won't be disappointed. 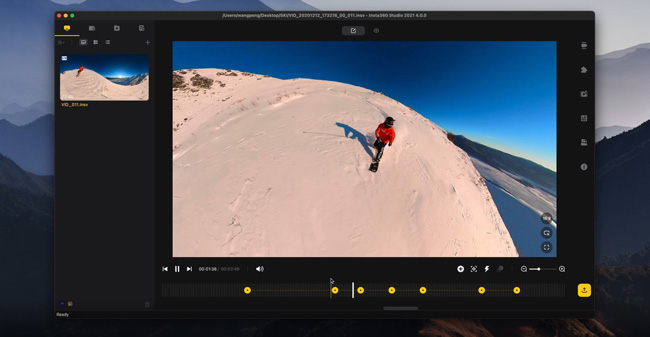 RAM: 16G and later for both versions

If you are one of the Gear 360 owners or you want to be after reviewing their products. Gear 360 ActionDirector is the one you cannot miss out. For one thing, you find it is a free 360-degree video editing software. For another, the tools of trimming, titling, adding transitions, applying filters, and stitching are at your disposal. Featuring a beautiful 3-panel 360-degree video editing interface where you can do rendering in real-time. 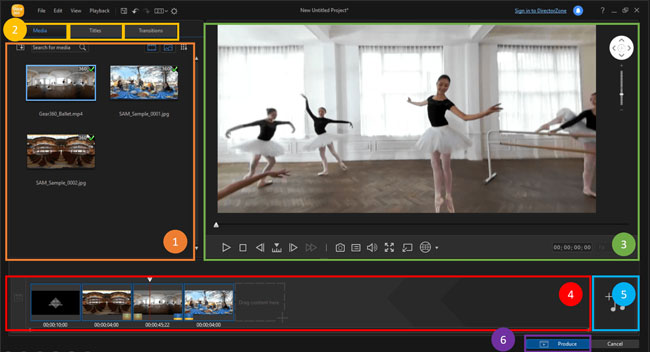 Processor: Intel Core i3 later or AMD A6 later

Not all 360 video editing software supports major formats for the wanted video, audio, and image formats like 3GPP, 3GP3, ASF, AVI, DIVX, SWF, AAC, AIFF, etc., so here is going to share with you the Movavi 360 Video Editor. But you can only download this tool on Windows computers. When it comes to the uploading channel, you need to click to open the Import icon, and go to the My Files section, then tap on the Add Media File. You can also choose to upload a folder.

The toolbar provides tabs to adjust colors, cut clips, and reset video properties. You can switch from 2D animation mode to 3D animation mode with pleasure. To apply effects like filters and transitions, go to the left sidebar to use the free modes. For example, you can drag-n-drop the Lens flare 6 between the two imported clips. 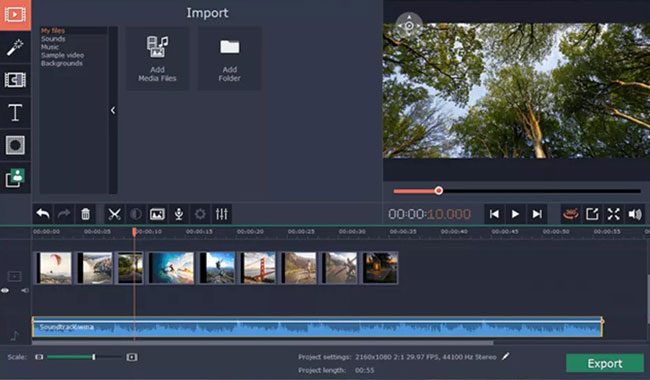 Operating System: Windows 7, 8, and 10 with the latest patches and packs

Processor: Intel, AMD or compatible processor, 2.8 GHz or above

A lot of users want to know how to record gameplay videos on the Xbox 360 Video Editor. To do this, if you already got a capture card, just prepare a new project that at least you need a USB cable and two HDMI cables, along with a network connection. Then connect your digital equipment, to be detailed, connect one HDMI cable to the In tab of the capture card, then click the Port tab to make it functional. Now you can connect to the USB and computer to record Gameplay in your videos.

Apart from that, you can choose Xbox 360 VR video editor to grade color and change video pitch. It is easy and allowable to trim out unwanted clips and crop out unwanted windows. You can play the video to render fast and download the result as you want. 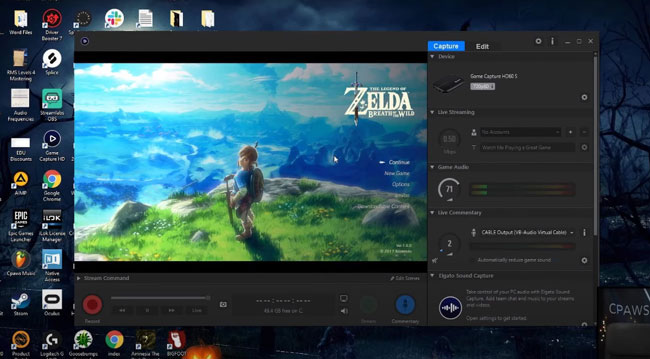 Comes with a display resolution of 1920×1080 and 3840×2460, Garmin VIRB is an easy-to-use 360-degree video editor and compatible with both Windows and Mac. Perfect for editing and playing 360 videos, adding 4K resolution spherical stabilization, stitching RAW clips, as well as applying augmented reality overlays.

After the whole workflow is finished, you are allowed to straight share the newly-made 360 videos to YouTube, Facebook, and other social platforms. Your brag-worthy files are shareable among your friends in the Garmin Connect online community. 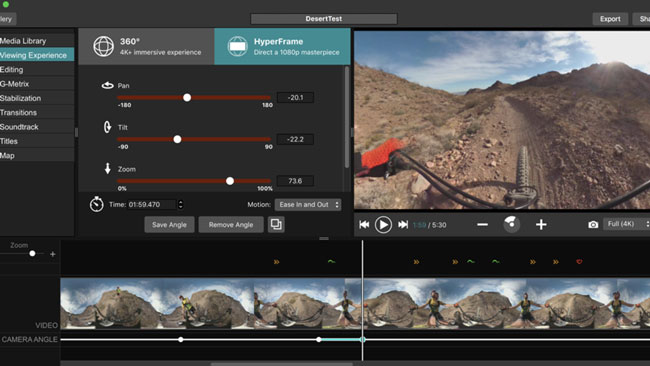 Download the GoPro Player for Windows and Mac to enjoy the 360 video conversion and editing is popular among 360-degree content creators. Smart tools like 2D image extraction from 360 photos and footage frames are good to edit with. Surprisingly, GoPro 360 video editor connects to all GoPro products flexibly and smoothly.

This is the best free 360 video editor to make edits frame by frame. Not only can you quickly edit multiple files, but also you find it likely to make all videos and images displayed from your GoPro Max camera. It supports a plethora of formats for YouTube and Vimeo. 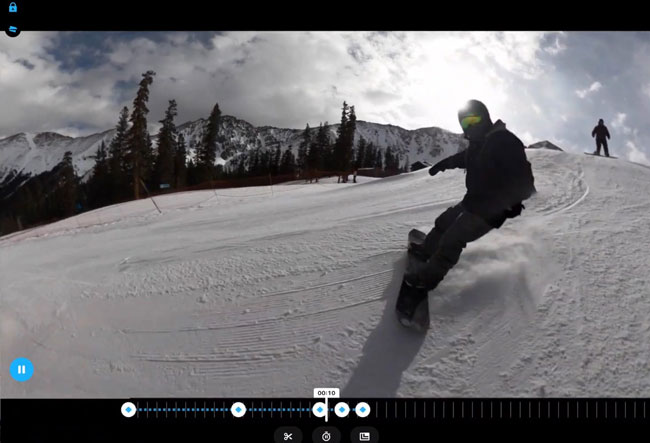 Mac and Windows users alike will appreciate the simplicity of the color grading toolset in Pinnacle Studio 25 Ultimate. It has a wide variety of 360 editing tools that are easy for beginners and professional users like 360 Video Converter and Recorder.

A USB connection is needed to import 360 videos into this lightweight video editor. After that, you'll be able to trim the video and remove extraneous elements like a monopod from your movies using the timeline. You can edit and compare other directionS in the second canvas, which makes your edits more precise and accurate. 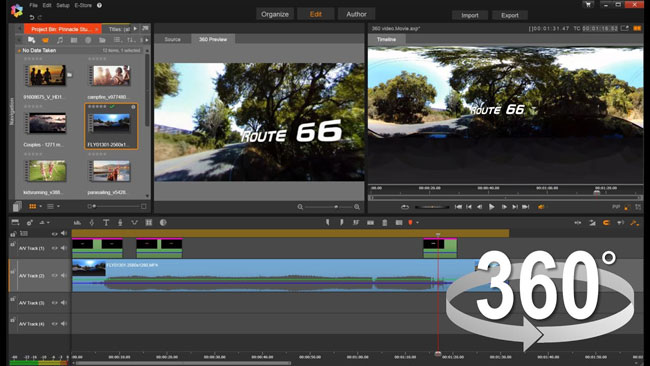 Manufacturers of VLC action cameras developed their 360-degree camera in the near past. In addition, they offered PC, Mac, and Linux users great UX and a free video-editing program. VLC is a completely free and open-source 360-degree video game editing software.

Stabilize, speed, flip, rotate, crop, and divide your 360-degree video options in the basic settings. You may also add captions that are automatically altered to accommodate your 360 movies while keeping the standard dimensions of the text intact. A transition library for 360 videos is included in this free 360 video editing software. The "G-Metrix" option is one of the unique aspects of this 360-degree software. 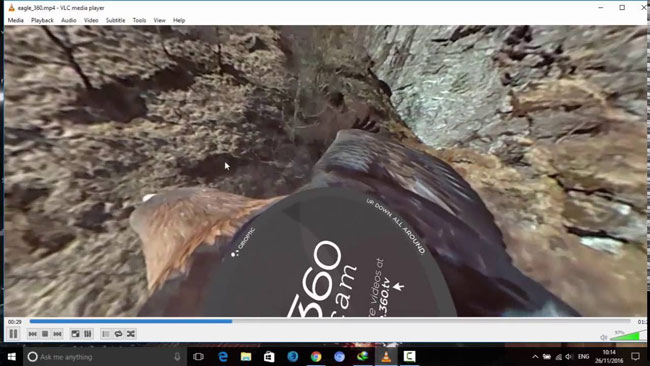 Operating System: All versions of Windows; macOS X 10.7 and later

VSDC is so popular among us YouTubers, Vloggers, and filmmakers in the video-making field that you find it professional and powerful to use. Comes with a 3D video view mode and 3D charts on the interphase, you need to care more about parameters in every corner once you want to create a good 360 video with it.

The full version of VSDC now sells at 19.99$ every month. You will enjoy the VIP services like the Hard Disk storage and 8K video uploading/exporting. You can download your video in a lot of formats for free or share the file on social media bluntly. VSDC is a professional-grade tool to apply color grading and sound equalization. 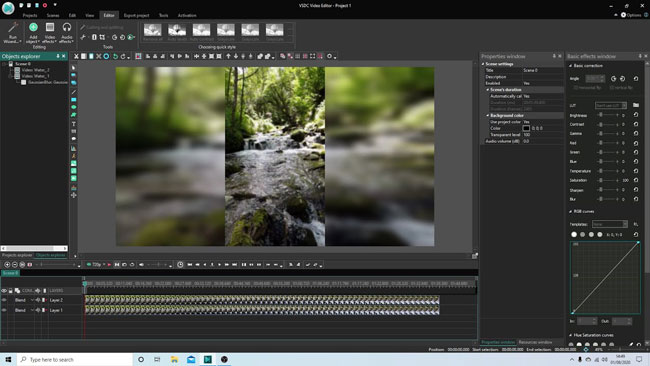 Operating System: Intel® or AMD Ryzen™ compatible processor with the work frequency at 1.5 GHz and higher

Final Cut Pro X is considered the most excellent 360-degree video editing software for Mac users, while Premiere Pro is the best for Windows users. Using this tool, you'll be able to deal with 360-degree clips in both monocular and stereoscopic modes. To detach audio from video, you need to double right-click the clip to choose to unlink the audio and video first.

You may import movies of various sizes and formats to edit them. Aside from that, the best noise reduction program may be replaced by Final Cut Pro X. You may produce 360-degree video using the VR headset. You may edit 360-degree and equirectangular footage simultaneously utilizing the program's preview window. You can also make sequential edits with the double-canvas design. 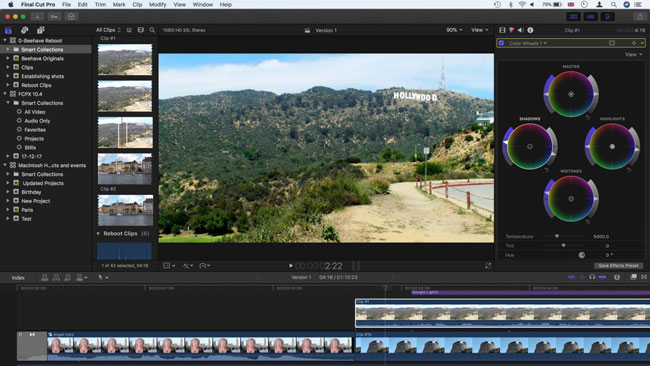 Adobe Premiere Pro is a modern and famous tool for editing 360 films in virtual reality and 8K frames. It can also export and import XML and be a vital photo and movie maker. Over 100,000 instructions are available on blogs, forums, and even 360 video editing books since Premiere Pro has been the most popular VR video editing program for over a decade.

● Editing the level of tilt and rotation;

It also lets you use different effects, titles, and soundtracks.

VideoProc 360 Video Editor is a one-stop shop for video editing. An audio/video/multi-track converter is also included as a screen recorder and video downloader.

It quickly edits, converts, and resizes big 360-degree videos, audio, and DVDs thanks to its hardware acceleration. The best thing about it is that you won't have to worry about lowered quality.

VideoProc's color grading, stabilization, lens correction, and free video cropping tools make it an excellent choice for anybody who needs to edit video. An easy-to-use editing interface makes this 360-degree video editor a pleasure to use. Thousands of user-generated content (UGC) websites may be downloaded using the software's built-in media downloader, available for Windows and Mac. 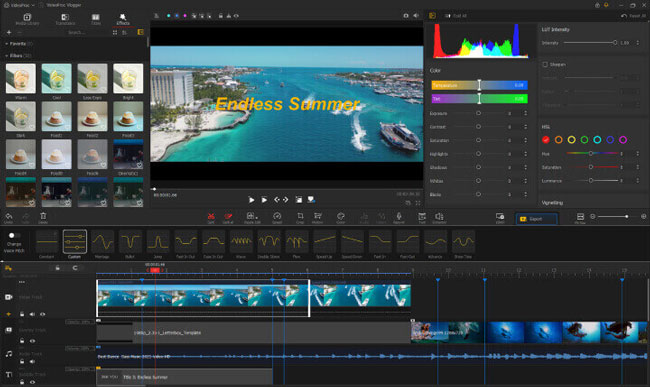 VideoPad is a free 360-degree video editing software. It is a 360 VR video editor for Windows and Mac OS. It's an excellent solution for those new to video editing and looking for something simple and easy to use. It differs from HitFilm because its user interface is simple and consistent in appearance.

With this video editor, editing 360° video is as simple as editing standard film. For example, you can begin with a new project of uploading files, trimming out unwanted 360-degree clips, and changing video resolution and framerate.

If you're looking for a 360 video editing tool that's easy to use and offers a wide variety of transition effects for moving between the footage, this one is for you. You may design your effect by combining many filters and choosing how lengthy the transitions should be. 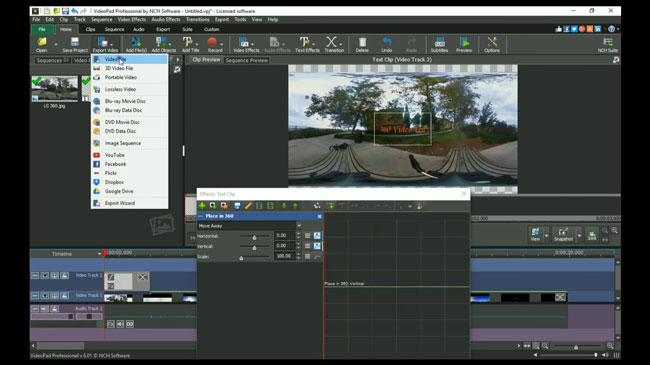 However, if you want to avoid dealing with system freezes, you'll wish for the most powerful video editing PC. It's compatible with Windows 10 and above and Mac OS X 10.14 and up. Add-on packs that allow users to edit 360-degree films are available for $24.99. Since the program is meant for users without tons of 360-degree video editing software using skills, you should have no problem using the tool. You should be able to handle any video editing application even if you are inexperienced with the technical features of its design.

AceMovi provides both a Windows and a Mac video editor, so users of both operating systems will be able to use it. To begin editing your video, download the appropriate version and run the application on your desktop right now.

To edit 360-degree videos, you'll need new editing software. Compared to other cameras, the footage does not appear to be flat. Therefore, to edit and flatten the video, you'll need 360 editors. The above-mentioned list is intended to help you choose the finest 360 video editing software for your needs.