How to Make A Double Exposure Video on Computer The double exposure effect is no doubt one of the coolest effects in video making, it’s not only fascinating but also super easy to achieve. If you’re running out of ideas to make your video look better, give double exposure a try. You might think this effect is something made by fancy cameras and professional editing technique since it’s usually used in TV series and films. But it’s actually much simple to achieve than it looks.

In this double exposure video tutorial, you’ll learn how to pull this effect off on your computer. Keep reading.

How to Do Double Exposure on A Video

Before you get started, you’ll need to get a video editor on your computer that can do the double exposure effect. TunesKit AceMovi is one of the best video editing software that can fit the job. By changing the opacity of the video in AceMovi, you can easily create a double exposure video with only a few clicks.

TunesKit AceMovi Video Editor is a powerful video editor that provides multiple effects and transitions. It comes with a screen recorder which can record images as well as the sound coming out of your computer. As a well-established video editor, AceMovi is mounted with features like split screen, filters, animations, texts, and music library. The user-friendly interface comes with all the effects and tools you need to embellish your video. You can make a fancy effect such a double exposure by simply changing the opacity of the video.

Next up, I'm going to show you how to do double exposure on a video in TunesKit AceMovi. Before you edit your video, make sure that you have already installed TunesKit AceMovi on your computer.

Open TunesKit AceMovi on your computer, then import the video files to the media box. You can click on the import button to upload or directly drag and drop the video files into the box. To make a double exposure effect, you'll need at least two video tracks on the timeline. Overlay another video above the first video, then click on the video on the top in the timeline.

Go to the top right panel. Under the Video tab, adjust the opacity to less than 100. You can drag the slider or type in a percentage to change the opacity. And now you've created a double exposure video.

There're a few more features you can make use of in TunesKit AceMovi to make your double exposure video look even cooler. Here's the step-by-step tutorial. Go to Text > Dynamic and choose a text and add it to your video. Click on it on the timeline and go to the top right panel, you can edit the text, font and size there. On the preview window, you can drag in to change the position of the text.

Add Filter to Change the Vibe 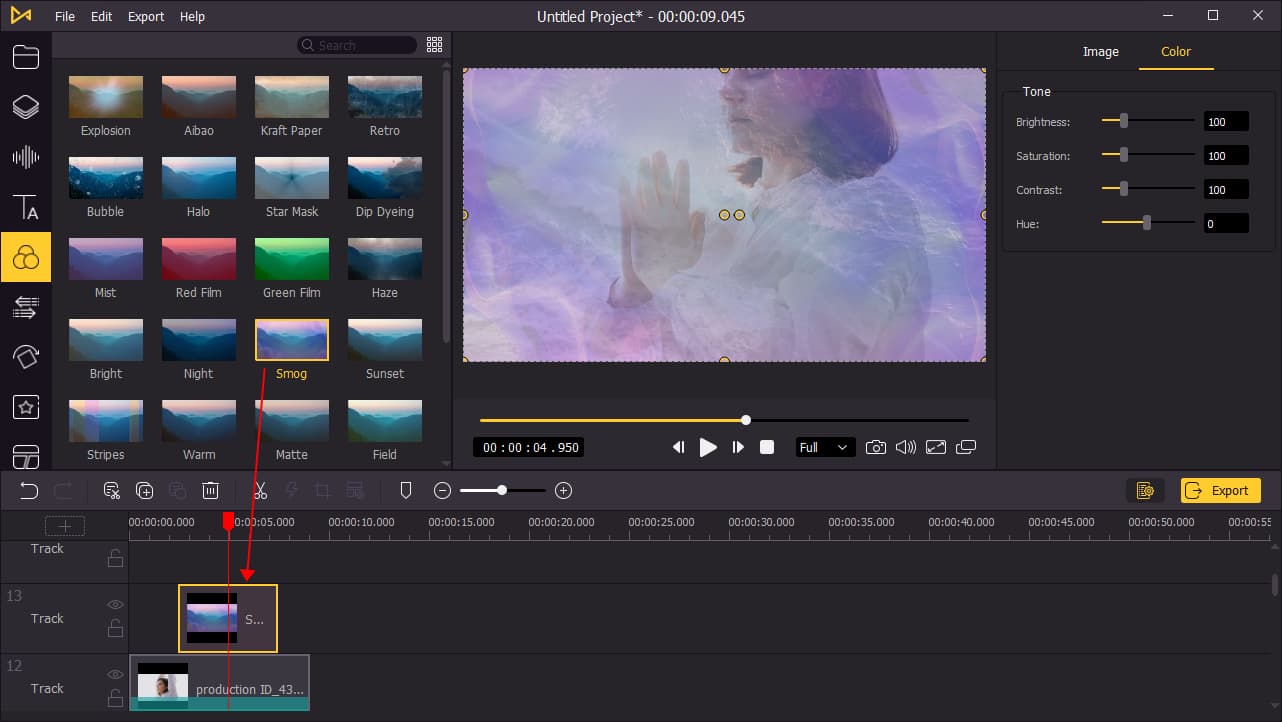 You can change the feel and style of your double exposure video by adding a filter. Go to the Filter box and drag a filter above the video track on the timeline, you can drag the filter track from the start or end to lengthen it.

On the top right panel, you can adjust the filter such as position, orientation, opacity and color. You can also go to the Transition box to add a transition to your filter. Go to the Animation box, you can find animations like bounce, jump, stretch, swing, dissolve and, etc. Pick one and add it to the timeline, you can change the duration and loop count on the top right panel. When you finish editing, click the play button to check the video.

Video Tutorial: How to Make A Double Exposure Video